Tohickon sticks its [RED] noses exactly where they belong on Red Nose Day, May 23 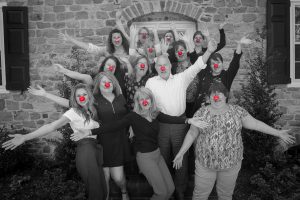 The folks at Tohickon Settlement Services are donning their newest fashion accessory and getting behind Red Nose Day on Thursday, May 23.

Since its debut in 2015, Red Nose Day has raised nearly $150million and positively impacted more than 16million children in the United States and around the world by funding initiatives to keep children safe, healthy and educated.

This year’s national campaign kicked off April 22, when the Red Noses went on sale nationally only in Walgreens and Duane Reade stores. It culminates on Thursday, May 23, with a special night of TV celebrating Red Nose Day on NBC at 8pm.

Walgreens, Bill & Melinda Gates Foundation, NBC and Mars Wrigley are major sponsors of the campaign, which uses the power of entertainment—and the universal silliness and barrier-breaking capacity of a red clown nose—to start the conversation and attract financial support.

“Child poverty bars too many children in our country and around the world from realizing their full potential for health, happiness and success,” says Brendan Nolan, president and CEO of Tohickon Settlement Services.

“If wearing a red nose for one day can help raise awareness and funds for this ambitious and much needed initiative, we’re all for it.”

Tohickon is also putting its best nose forward with a donation of $2500 to the campaign.

Follow Tohickon and other organizations and individuals on social media @RedNoseDayUSA and share your Red Nose Day pics using the hashtag #RedNoseDay.

In the U.S., Red Nose Day is a program of Comic Relief USA, a 501(c)(3) nonprofit organization. Donations to Red Nose Day are tax deductible to the full extent allowed by law. Find out more at ComicRelief.org.

Money raised through Red Nose Day provides grants to support programs that provide children who are living in poverty a range of services: essential medical services including vaccines; access to water, sanitation and hygiene; meals; education and to fight homelessness.

To join the fun and support Red Nose Day, donate online, participate in or organize a fundraiser and tune in at 8pm on May 23 to watch NBC’s star-studded night of Red Nose Day programming.

If you have questions or wish to know more about title insurance, settlements or Tohickon’s services, please send us an email or give us a call.